Home » Adventure » Close Shaves from Around the World

Close Shaves from Around the World 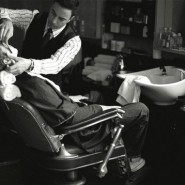 Getting a shave is without a doubt my favourite experience the world over! It differs completely from country to culture and offers immediate membership (even as a funny looking foreigner) into that international men’s club called: The Barber Shop.

You would have thought that at my age I would have had enough shaving practice to get it right. But no, even as I sit here writing this, I have three gaping wounds on my face, self-inflicted from this morning’s wrestle with the razor.

My inability to clear my own face of it’s ever present stubble has often led me to the shaving professionals, particularly while traveling overseas where in many countries a barber’s manpower is much cheaper than buying a package of Gillettes. Not too mention a talent and finesse in transforming me from Grizzly Adams to a prepubescent teen with a couple of deft swipes that is infinitely greater than my own. (In fact, I have to admit to harboring an indulgent “If I Were Rich” fantasy of stumbling out of bed each morning into the barber’s chair of my personal shaver-in-waiting who’s dexterous hands pinch, squeeze and stretch my face – manipulating it to produce baby smooth skin. Ah! Complete bliss!) 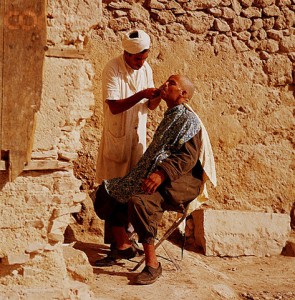 But a true shave is much more than just a removal of stubble, it ranges from ritualistic experience in some countries to a clinical procedure in others. Some include head to toe massages; others stinging astringents or liberally applied local colognes that leave you smelling like you fell into a soured vat of Old Spice. While even other shaves, due to some cultural or society influence, will include abundant amounts of time focused on one aspect of your face: such as the barber in India who spent forever trimming, no ‘designing’, my nose hairs; the Vietnamese barber that insisted clearing my inner ear of every innocent hair with an inserted contraption that had me fearful of a punctured eardrum, or the full Russian pompadour hair style created post-shave by the insistent barber in Moscow before he would let me leave his chair.

Wherever the shave, upon entering the barber’s shop there is always the promise that each one will be different and that each one will be memorable: From being toasted by an open flame in Turkey by a barber who decided that what he couldn’t shave off he would burn; to watching the Egyptian barber ‘triangulate’ a piece dental floss between his two thick thumbs and the gap in his two front teeth before rolling it over the innocent blond hairs of my upper cheeks, twisting them around the floss and then painfully pulling them out. Ouch!! 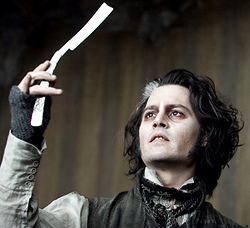 Which leads me to point out, that not all shaves are soothing experiences or that all barber’s should be allowed to wield sharp objects so close to your throat. I have also had my fair share of manglement, from the hatchet job in Brazil that took two weeks to heal; to the Pakistan shave that left my face looking like a pepperoni pizza and me with an antiseptic stone attached to it for the remainder of the day in an attempt to stop the bleeding. Then there were the giggling women in Thailand that weren’t sure exactly what they were doing so I had to show them; or the shave in Kenya with a rough blade that felt more like sandpaper, and like a broken lawnmower left large patches of facial hair behind.

That said the majority the shaves I’ve had have left me walking out feeling far more refreshed & relaxed than when I walked in. So much so that often I’m willing and encouraging my stubble to regrow so I can savour the whole experience again.

What’s your favourite indulgence while travelling?