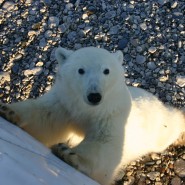 Ever since I can remember I have wanted to visit Churchill, Canada. It is the place to see polar bears. A couple of years ago, I was lucky enough to go:

An endearing little frontier settlement, sitting on the western edge of Hudson Bay in northern Manitoba, it is so remote it can only be reached by air or rail.

For six frenetic weeks each Autumn (October & November) tourists descend on the tiny town as the polar bears they’ve come to see start to congregate on the Bay’s shores. 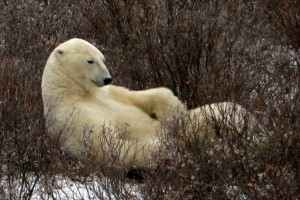 While independent travel is possible most people sign up with companies like Frontiers North Adventures which offers a series of tours that mix and match the town’s attractions with a minimum of two days on the permanently frozen tundra. It is here the bears bide their time as they wait for the sea ice to form so they can go out and hunt seals following a summer of slim pickings. 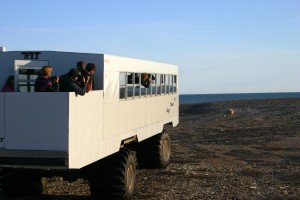 Access to the tundra is via a Tundra Buggy – it’s hard to imagine a more awkwardly lurching vehicle. In fairness, it’s not necessarily the fault of the buggy as much as the tundra it needs to traverse. Essentially a big rectangular box on wheels (think classroom annex) with rows of seating for up to 40 people on either side of a broad centre aisle, 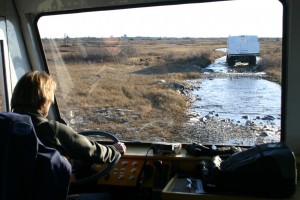 lowerable windows, a gas heater complete with chimney, toilet, and balcony out the back for outdoor viewing. The massive truck-like tyres mean the buggies can climb over the rocky, wet and snow encrusted terrain but also provide a safe height that the bears can’t reach. But that doesn’t stop the inquisitive beasts from trying. 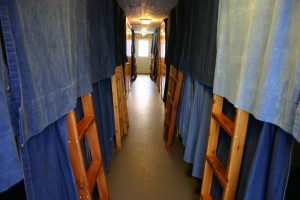 For the even more adventurous there is the Tundra Buggy Lodge. As its name suggests, the Lodge is in fact a series of specially outfitted buggies lined up like train carriages to form a lodge. Sleeping accommodation is also train style, with bunks on either side of a central hallway made private with curtains. 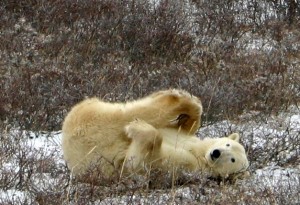 Stays on the Tundra Buggy Lodge can range from 2-5 nights. The clear advantage is that guests never have to leave the tundra to return to town accommodation and have the added bonus of being able to view the bears in their natural habitat whatever the time of day. The only downside: there’s no getting off the lodge for a walk about on the tundra. Despite their cuddly appearance, polar bears, particularly hungry ones, pose a serious threat to humans. 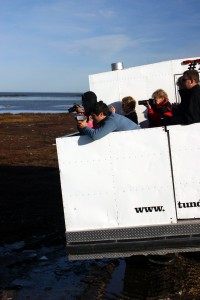 Spotting a polar bear in the wild for the first time, few can contain their excitement. It is often referred to as a life changing experience by those privileged few tourists. Even seasoned tour guides become animated with every new sighting as each polar bear exhibits a distinct personality. (Polar bears are thought to be as intelligent as apes.) Some sleep and seem blissfully unaware of the tourist intrusion, another might roll around on its back playing with its paws, while the lucky tourist will see two males sparing on their hind legs – a ritualised fighting that tests their strength as a warm-up to life on the ice after the long sedentary summer months. 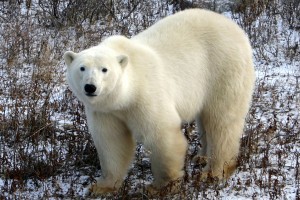 Then there are the polar bears that need to satisfy their innate curiosity by leisurely ambling in their almost-clumsily plodding gait straight towards the Tundra Buggy. Rearing up on its hind legs, its paws placed against the buggy for support, it stares directly at you. It’s hard to look into the unfathomable black coal eyes full of curious intensity and not feel great responsibility

for the choices we make and the influence we have over its habitat. It’s almost as if the Arctic King has personally requested you become his ambassador before he becomes the first casualty in a line of many affected by global warming.