Social Networking Takes to the Skies 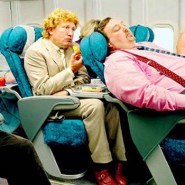 KLM’s newly launched service, Meet & Seat, allows those with facebook and/or LinkedIn accounts to share their profile details pre-flight with other passengers. So when it comes to choosing your seat, in addition to waffling between window or aisle (does anyone ever intentionally choose a middle seat? Well, they many now!!) you can also peruse fellow passengers’ profiles to determine where and next to whom you’d like to sit.

I’m already envisioning a large scale game of musical chairs — although there is no word if you’re able to change your seat if you discover via the same social networking that your seat mate isn’t someone you feel like sharing your space with — where seat stalkers follow you around the cabin every time you choose a fresh seat. Until there’s no more seats left to choose … and … then … you’re … stuck!

How successful the initiative will be remains to be seen. The video used to launch the service (see below) suggests that this will address the previously-missed opportunity for networking, making friends (or even (blind) dating!) in the sky – AND that passengers on the same flight will have enough common interests (business or otherwise 😉 ) that they’ll want to connect before the flight and even share a taxi at the end of their flight to their final destination.

Personally, I think it might be a little creepy wondering if the person walking down the aisle giving me an intense stare has already read my LinkedIn bio and rifled through my facebook photos. Or that the person sitting next to me, would have contacted me before the flight so he/she could get to know me better – as if being squeezed into economy for a long haul or night flight wasn’t enough time to get to know each other more intimately than normal. 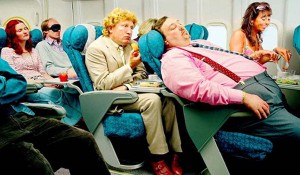 “Hey buddy, I’m Jeremy. I’m going to be your seat mate on Flight #77. You excited? I’m revved up. I’ve heard we can expect turbulence over the mid-Atlantic! Are you ordering the chicken or beef? Btw, what are you wearing for the flight? I want to make sure we don’t clash – you know, colour-wise.”

I don’t know about you, but apart from exchanging some initial pleasantries with my seating companions as we jockey our carry-ons for overhead storage supremacy at the beginning of the flight, I don’t really have any further interaction. For me flying’s always been more of a personal journey. The very nature of noisy planes with face-forward seating with little if no twisting room, combined with ‘don’t talk to me’ earphones so I can watch my personal entertainment selections have done little to encourage social interaction … save for the apologetic bathroom break that causes your whole row to shift. Then again there was that time that I woke up to discover that comfortable shoulder I’d nestled into was my neighbour’s. Maybe and only maybe (!), at that point, you might want to consider becoming facebook friends.

Maybe I shouldn’t knock it after all. Hey, it worked for Fran Drescher right? She apparently sold ‘The Nanny’ by pitching the premise to a TV exec she was sitting beside on a flight.

Useful? Something you would try? What are your thoughts?