Around the Airport in 80 Days 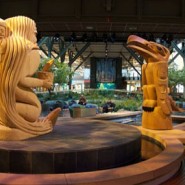 Vancouver Airport (YVR) launches a contest to find a correspondent to live, eat and sleep at the airport for 80 Days ~ without leaving.

Following in the footsteps of Queensland’s hugely successful viral campaign to fill the World’s Best Job, earlier this week Vancouver Airport launched a web-based contest to find a storyteller who would live at YVR for 80 days and 80 nights telling the behind-the-scenes stories of Canada’s second largest airport – a small city in itself with more than 23,000 workers. The only catch: the correspondent can’t leave YVR for the entire duration of the gig, which begins shortly after YVR’s 80th anniversary on July 22, 2011.

It’s an interesting idea and no doubt will garner much attention but as much as I love airports and would love the opportunity to stick my nose into all it’s closed corners, being trapped inside a building (however large and however beautiful – and YVR is gorgeous as airports go) for an entire 80 days – particularly over the city’s short summer – would drive me crazy.

What do you think?

The contest is open to residents of B.C. with prospective correspondents asked to submit a video online that highlights their storytelling savvy. After a shortlist of finalists is chosen, the public will have the opportunity to vote for its favourite applicant, where he or she will begin an 80-day assignment on August 17, 2011. Sleeping at The Fairmont Vancouver Airport Hotel, the correspondent will receive a living allowance during their time at YVR and an honorarium upon completion.

Equipped with a camera and editing equipment the correspondent will act as an all-in-one producer, director, reporter, editor and post-production supervisor … sharing stories of living at an airport full time on liveatYVR.ca, Facebook and Twitter.