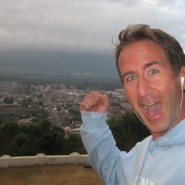 Today I reached my goal!

First it was my unfitness, then it was this altitude’s lack of oxygen, then it was the cobblestones, then it was the cold morning air, then it was a stomach bug that slowed me down BUT still I persisted with my (every other) morning run up the mountain to the lofty heights of Antigua’s Cerro de la Cruz, with its spectacular view over the city. (I took my camera up with me each time to document my achievement with one shot/per run of the many moods of the town and its neighbouring volcano.) 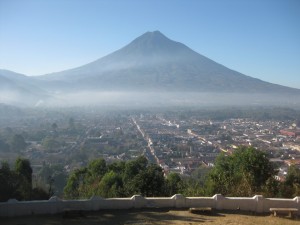 Maybe it was Madonna egging me on via my iPod with a beat that finally matched my step, or that huge plate of gassy pasta I ate last night (what!? I’m not above accepting a bit of help from jet-propulsion!) that fuelled my run, or maybe after persistent days of training my legs and lungs I honestly earned my reward. Oh happy day! This morning I made it to the top of the mountain for the first time without stopping!! (Ah what the Hell, let me add a few more exclamation marks!!! I’m THAT excited!!!!!!!) 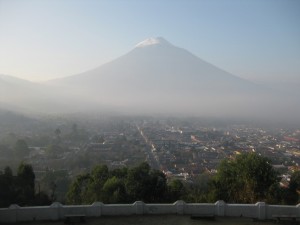 I started today’s run with a springy step. An indication that today would be the day?? I didn’t want to be that cocky, so I held back, harnessing my energy, knowing better. Pace yourself Michael. I didn’t want to burn out on the steep steps climbing up the mountain; the place where I’ve normally been forced to stop, clutching my chest to prevent my heart from jumping out in its wildly uncontrolled pumping, while using my other hand to pry my stomach muscles apart, they would clenched so tightly from my laboured breathing. My throat burning from the cold, thin mountain air, my protesting legs like jelly as I tried to raise them yet another uneven step. It’s a strange 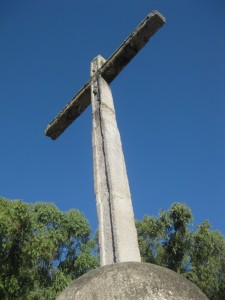 thing to say/think “I feel like I’m dying” … to be honest I think dying when it finally comes around will be a lot less painful than my body’s revolt at my attempts to master it. But that’s how I felt.

Yet, I persisted. Every other morning, getting up, stretching, and trying not to think of the pain that awaited me mid-mountain. Trying to picture the stopping spot from the previous run and envisioning myself surpassing it, if only by a few more steps. And so I climbed a little bit higher each day.  Then came the stomach bug which I refused to let curtail my runs but I couldn’t deny it’s affect on my performance so I kindly cut myself some slack when I couldn’t go as far. 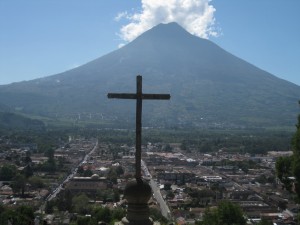 When I got to the stairs today I tried a new tactic: I didn’t look at the formidable climb ahead. I’d run it enough times to know what lay ahead. Instead I focussed simply on the step ahead and the one after that when it came into view. Step by step, despite temptation to measure my progress, I pushed past the steep portion of the trail and couldn’t believe it when I made it to the leveller path that would take me the final 100 metres.

The picture of me above sums up my excitement of making it to the top without stopping.

Elated, I ran home on the energy of my accomplishment; speeding through the streets like a demon.

I’m already looking forward to my next uninterrupted run to the top … and increasing my pace!