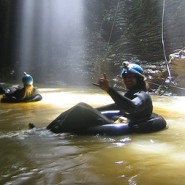 Leave to the Kiwis to take caving one step further to create an adventure sport called Black Water Rafting just so they can clean their clothes. I went underground for the full story.

I first discovered New Zealand as a backpacker in 1990. I spent three months traversing the Land of the Long White Cloud and fell in love with every cm of its 2,000kms from tip to toe. I’ve lost track of how many times I returned to what is firmly one of my favourite countries, but I never leave without trying some new adventure that some mad Kiwi has cleverly concocted. This, Black Water Rafting, was one of the first out-there adventures I had and I’ve been back to repeat the experience I loved it so much!

Ever had the urge to descend fifty metres underground and then immerse yourself in frigid, eel-invested waters in order to see a few million glowworms?

Then black water rafting is the sport for you.

Black water rafting is in fact a misnomer. The water is not black, there are no mighty rapids to conquer, there are no rafts, or paddles to coordinate. Instead thick wetsuits, goofy white boots, colourful bloomers and hard hats fitted with waterproof electric lights are de riguer. The ‘rafts’ themselves are tire inner tubes, which you wedge your backside into in order to float through an underground river.

The home of Black Water Rafting is just two and a half hours drive south of Auckland at Waitomo, where limestone, water droplets, and eons of gravity have combined to create a network of caves famed for their resident glowworms.

The sport started innocently enough when local cavers, sans washing machines, decided the best way to clean off the dirt and grime of a long day’s caving was to float and tumble their way downstream as they exited the cave system. Returning to the surface clean, they dubbed this last adventure of the day, the ‘Laundry Trip’.

It wasn’t long before they realised that others may also want to run the rinse cycle and thus a commercial enterprise was born.

While there are a number of different ‘trails’ on offer, my adventure began with a 30 metre abseil into the nether world through a narrow throat-like opening in the ground.

The tight squeeze required some maneuvering before the earth consented to swallow me whole. But unfortunately, having shifted in my harness incorrectly to gain the gullet, I was unable to enjoy the drop. Why? I’d cut circulation to a trapped testicle awkwardly caught in the harness. Rapidly descending like a spider on his thread I raced down the wet walls in damp darkness only finding relief when I reached the bottom of the cavern, and both feet were firmly planted on the (under)ground.

Moving through the tunnels single file we scurried around upreaching stalagmites and ducked under century-sharpened stalactites and crossed metal grill bridges spanning gaping chasms that plunged further than the helmet torch light could reach, before arriving at challenge number two: a flying fox run deeper into the darkness.

Given the choice of speeding along the cable with or without your helmet lamp on, like most others, I made the macho choice to ride blind, but managed to completely destroy this pretence of masculinity by screaming when the freefalling ride overwhelmed my senses.

At the halfway point of what was to be a four-hour underground trek we stopped for a picnic on the banks of an underground river. Tasty sandwiches and warm tea/coffee were on the lunch menu.

Asked by our guide to ensure any loose crumbs fell into the river rather than on the ground where they would attract hungry moles, I thought he was joking when he suggested that it would be better to feed the river eels. “Oh right, as if there are really eels,” I uttered in disbelief, “C’mon mate we don’t scare so easily!” That was until he turned his headlights to the water below to reveal two black eels silently slithering against the current. Swallowing my cynicism, I decided my best option for a peaceful river journey was to make friends with the eels so I shared my sandwich with the appreciative creatures. It seemed to work, as they didn’t bother me when we finally entered the water although some not so generous with their meal found they had the odd eel slither up against them.

Lunch ingested, it was time for the big splash. One by one we jumped off the 6 metre cliff we had just used as our picnic perch and hurled ourselves through the air, ass first, to land on our inner tube before breaking the river’s icy surface with an enveloping splash and further wedging our bodies through the tires. A shocking experience made all the more painful by the chilling water slowing seeping into all corners of my wetsuit. If I thought my genitals had suffered abuse from the climbing harness, it was nothing compared to the discomfort endured by the frigid water. They quickly retreated from the experience. 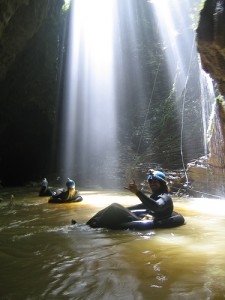 Thoroughly immersed, we floated, swam, splashed and crawled our way upstream consistently tripping over an uneven river bed, marveling at the stalactites and stalagmites, and the various sea life fossils embedded in the walls that our narrow mining lights would illuminate.

Reaching the end of one arm of the cave we created an “eel” ourselves. A phrase coined by black water rafters, ‘eeling’ is a process whereby everyone links together by placing their feet under the arms of the person in front of them, thereby forming a chain of floating people.

With my protruding bum acting as a keel and my dangling feet my rudders, I was able to rest my head back against the tube and with the aid of the current steer myself downstream. It was in this manner, with our lights extinguished, that our group of eight snaked its way through the caves under a galaxy of glowworms so intricate as to make one believe that we were in fact floating under a night sky rather than 50 metres below the earth’s surface.

This image was further enhanced by our guide creating a resounding ‘bang’ with a small firecracker, the vibrations of which made the glowworms brighten and intensify as their delicate, hanging webs trembled sensing that food might be nearby.

The ascent to the surface is equally as challenging. Explorers squeeze through narrow passage ways sometimes on hands and knees other times on stomachs, into small chambers barely big enough for the group. Climb up through an underground waterfall. Reaching for grips beneath the tumbling/cascading water – following the water fall to the surface.

The whole trip takes about five hours, although there is a shorter and simpler three hour journey. Time goes quickly underground.The end of the trip comprises of much-welcomed hot showers and hot soup to warm the inside.

To do or not to do? There is no question!: Adventure comes in many forms and challenge is a personal and highly subjective thing. Sports are a great way to get out there and challenge yourself on regular basis. Mix in a bit of the fear factor and you’re off to a winning start.

Other bizarre adventure sports worth experiencing:

What’s one of the whackier experiences you’ve ever had?