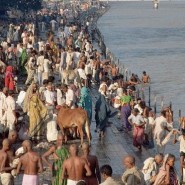 A small story. A dusty memory that jumped into my consciousness the other day. (I’m not sure why.)

Cows, of course, are venerated in India as part of the Hindu religion … I was walking through the narrow streets of Varanasi (an incredible must-see destination in India) having just visited the famous steps that lead down to the Ganges River when a white Brahman cow (complete with horns!) walking in the opposite direction took a dislike to me and attempted to gore me. 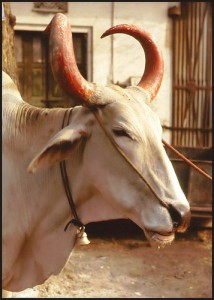 Luckily I saw the attack coming and was able to grab on to his horns as he swung his head towards me and used them to leverage my way out of his way. No one on the street seemed particularly fazed by the attack, but I walked away feeling blessed (not by the cow) that I had avoided serious injury.

I’ve had a couple of other animal attacks in my travels:  There was the elephant that I got too close to in Zimbabwe who made it very clear I was encroaching on his territory by stamping his feet, shaking his sizeable ears and then charging me. Message received. I ran full speed the other way. 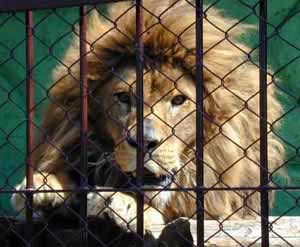 Then there was the lion at an Indonesian zoo who took a swipe at me. I forget the circumstances of how – BUT my travelling companion and I were invited for a behind the scenes tour of the zoo – which included the lion enclosure. Unfortunately, the lower feeding flap in the door to the lion cage had been left open and the lion presumably thought I was his next meal delivery when he took a swipe at my legs. The door flap was quickly closed thereafter.

I could talk about standing on the edge of Churchill in Northern Canada in the middle of the night, as I attempted to see the Aurora Borealis without the interference of the town’s lights and the formidable feeling of having a number of hungry polar bears staring at me from within the cover of darkness, licking their lips at the tasty meal I’d make, But then that could have been my imagination.

Or then there were the Easter goat races in the outback town of Lightning Ridge in Northern NSW, Australia where a couple of renegade goats (driven by children in billy carts behind) who didn’t know to stop but instead ran full speed into the naive bystanders (that’d be me!) standing across the Finish Line. Thankfully I have quick reflexes. 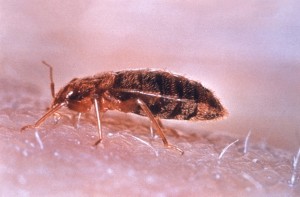 They may not be big, but their bite packs a nasty punch. I’ve tossed & turned with bed bugs in Indonesia (thankfully my only one experience with the nasty critters) and woke up in a blood-flecked sheet, then there was the mosquito soup that descended upon my bare flesh in Northern Finland, the fireant that bit the bottom of my foot while I was peeing in the bush in Byron Bay, Australia – a bite that felt like a hot knife pushing into my foot, or the bee that stung while riding atop a bus in Africa – but to be honest I think I ran into him.

And finally, my first ever animal attack, the dog that chased me and my BestestCuz up a fence as children in England. It left me scarred and afraid of man’s best friend for some time after. Particularly of those stray dogs that seem to rule the towns of some developing countries.