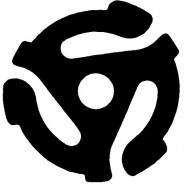 You know, the thing that they used to put in the centre of the records (45s to be exact) to allow you to place them on your record player. I saw one on a radio station advertisement recently and immediately thought “How clever?!” I didn’t have to think twice about the music the station played; that ‘do-hickey’ immediately conveyed a time and place in the last century making it instantly recognisable and appreciated by its demographic.

My next thought was “Oh s*%!, I’m that demographic”, and I looked around the bus and started to wonder whether any of the young’ns with their iPods cocooning them in an anti-social bubble of sound and their smart phones tearing their attention away from the world passing by would actually know what that do-hickey was?

Suddenly I felt old. But then I reminded myself:

Change is constant. Age is relative.

I’m sure there are plenty of people that see me as a young ‘whippersnapper’. I don’t say that as a consolation. I certainly don’t believe that youth has the market cornered on embracing life. Quite the contrary, I extol the virtues of challenge and that is subjective to personality not governed by age.

Still … there was another time recently when I felt like an old man: I took something to get fixed and after the young  salesperson finished making some comment like ‘Wow, didn’t know they made those back then’ he proceeded to show me that it was actually substantially cheaper to buy the new & improved version (with added bells & whistles!) than repair my antiquity. (No thanks, I like my antiquity!)

There’s a great ad for underwear that ran in Australia a year ago. (See below).  Again, I thought it was an incredibly clever ad that compared two different generations of men and having them both not understand the other, but walking a line that neither was right. Or at least that’s how I interpreted it – perhaps because I sit between the two generations portrayed in the commercial I found myself laughing (good humouredly) laughing at both groups of men.

Age is all a matter of perspective. (Although I do have a burning question: If age brings wisdom, why do we still suffer (looking back) from so many bad haircuts/styles?)

I remember stepping into a Virgin music store in San Francisco on a mission to find a copy of the BBC television series of Little Britain for some friends. I asked the young girl at the reception desk where I could find the videos. She paused for a moment looking perplexed before a dawning rose across her face. Then, raising her voice slightly (as if I couldn’t hear) and speaking slightly slower and over-enunciating (as if I couldn’t understand) she said, “Oh, you mean the D-V-Ds. They’re on the 2nd floor.”