Home » Blog » Back to School

Today I went back to school – and my head hurts.

As part of my assimilation into Guatemala, my newly adopted country, I’m attending Spanish classes four hours a day, for four days a week. (The standard is five days, but I don’t think this wandering soul can’t sit still THAT long … and let’s not forget about my hurting head.)

My goal is to give my pigeon Spanish broader wings and help it take flight, soar even! My Spanish to date has done me well. It’s gotten me accommodation, negotiated prices, ensured the water in the hotel was hot, helped me find the beach/the bus station/the barber, and allowed me to order at restaurants with confidence.

Now it’s time to fill in the gaps and move beyond traveller’s Spanish.

I’m not sure how long that will take. I have two things pitted against me:

One, a bad habit of speaking English – even when there are those native speakers willing & patient enough to speak Spanish with me. (I’ve noticed here in Central America, unlike other destinations I’ve visited, people are incredibly appreciative of any and all effort you make to speak their language … and are even willing to take the extra time to teach you.)

Two, while I can read proficiently, understand well enough when listening, I have next to no confidence in speaking. My brain seems to trip and stumble at the simplest things – like whether it’s too late in the day to say “Buenas dias” or too early to say “Buenas tardes”. I live in hope of that magic day when it suddenly all comes together and my word stumbling turns to smooth talking.

Anyone who goes back to school should be commended. Does anything really change from those highschool days? There’s still first day jitters, wondering whether you’ll get along with fellow classmates, whether you’ll like your teacher – and if they’ll like you! Or does going back as an adult only magnify those feelings.

As The Experience Junkie, I advocate any opportunity to invest in yourself; for realising that while most answers exist within, some skills are better taught and that information imparted through lessons is more rapidly absorbed. Or not. Did I mention my head hurts? Sitting through Hour #3, despite my enthusiasm, I found my mind wandering: How did I ever concentrate through a full day at school!?

My lessons are simple enough: I sit with my teacher one-on-one and she speaks only Spanish with me in a slow and over-pronounced manner – getting up from the table occasionally to act something out if I get a puzzled look on my face. (She’s also good at drawing; she drew lettuce and I recognised it! But sadly, already can’t remember how you say it in Spanish. No salad for me this week.)

Additionally, she pulls out memory cards (for children) and tests me to recall the opposite action to the one the card displays. Memory. It is definitely a game of memory at the moment; for all words, not just those on the cards, that I endeavour to remember as I try to increase my vocabulary. Perhaps that’s why my head hurts? 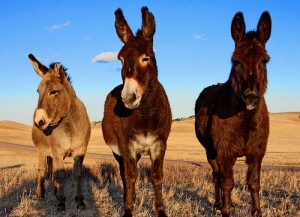 The most rewarding part of today’s lesson was a small story she had me read about a man who goes to the market one morning and buys four donkeys. He mounts one and sets off home. On his way, he counts the donkeys “1, 2, 3 …” (neglecting to count the one he’s riding) and can’t figure out where the fourth has gone. When he gets home that afternoon his wife greets him at the gate and he says to her, “This morning when I was at the market I bought four donkeys but now I only count three. One, two, three …” To which his wife replied, “Really? Are you sure? Because I count five asses!”

Not only did I understand the story in Spanish, but I got the joke! Perhaps there’s hope for me yet.