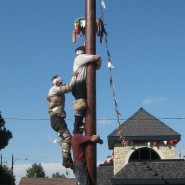 I’d never heard of it before (and you know how that’s gets me excited!): grease pole climbing.

I had my first taste of it yesterday at the Festival Italiano in Guelph, Ontario, Canada – proof positive that small towns (and not just big cities) have plenty to offer in terms of adventure and undiscovered experiences.

Crudely surrounded by a couple of mattresses and scattered stacks of hay, two tall timber poles (23ft & 18ft), liberally greased with as much as 30 litres of motor oil each, stood at the ready for the three 4-man teams (and one co-ed 4-person team) to clamber up and claim the $1000 prize at the top by snatching one of the red flags attached to a dangling side of ham or salami at the pole’s summit.

Funny? Dangerous? Inspiring? I still haven’t decided which; perhaps all three! That’s likely why it attracted such a huge crowd that stayed and cheered right through the teams’ eight attempts.

From the outset, one team seemed to have the focus and preparation to meet the challenge. Unlike the other teams which seemed hell-bent on getting to the top as soon as possible, this team approached the pole with the simple goal of using each successive attempt to rid the pole of another foot of grease – large blobs of the coagulated sun-baked oil went flying into the crowd as it was wiped off the pole! Minimising their efforts and conserving their strength for later attempts once the calculated task was complete they’d be content to simply slide back down and wait for their next turn. 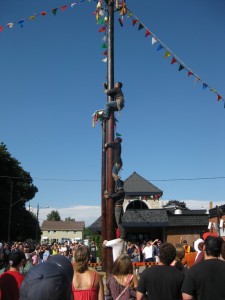 Still a long way to go for Team #2

The other teams were a bit more humorous and far more hungry. Struggling in the heat, you had to admire their determination to clamber atop each other and stand on each other’s shoulders,  or even more comically, each other’s heads! – a task that became increasingly difficult the more oil their hands and clothing collected.  But it was clear they didn’t have a longterm plan of attack, and were using brute strength to reach their goal. And that’s where the hard work came in. Four people standing tall on each other’s shoulders was still not enough to reach the top, not by far, and it was when the top-most person would embrace the pole that hilarity ensued, as they’d often slip straight down, fireman style to the ground, knocking their teammates down the pole with them. The pole may not have been as greasy thanks to the first team’s efforts but it was still incredibly slippery.

And here it was evident that the event was not without its dangers. The co-ed team (on the shorter pole) which had come within a hair’s breadth of clasping the red flag, encouraged by the collective will of the gasping crowd, slipped at the last minute sliding down the pole on top of each other’s heads. Despite getting so close – having had the wind tease the red flag from their grasp – they removed themselves from competition due to injury. 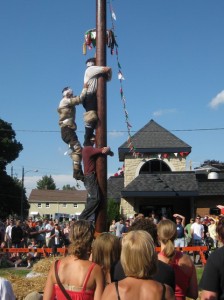 The winning team on their final ascent

Despite the discomfort of having three people slide down on to your head, I particularly felt the danger for the daring fourth climber as he clambered up on top of  his three teammates, trusting his weight to their clothing (belts especially came in handy for hand and foot holds to gain leverage over one another) and his greasy hands. One team tried a leapfrog maneuver that saw one guy trying to climb over his mate while his mate was tightly hugging the pole with all fours. At one point he was leaning precariously out from the pole, trusting all his weight to his mate’s slippery grip, and his grip on his mate’s belt! 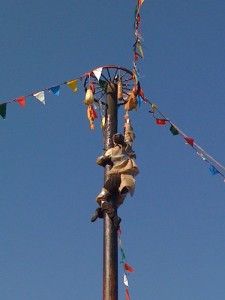 Again I come back to the first team who had strategized with a slow but effective plan of attack. They had prepared with a selection of clothes they could change into if their clothing got too oiled, resorting on the final attempts to taping large piece of burlap to the ‘top guy’s thighs, arms and chest to assist with added grip as he shimmied up the pole.

With the crowd behind them on their 8th attempt the confident team snatched the flag from the dangling salami and claimed the prize.

It was a lesson in the power of planning, preparation & patience!

Does your hometown have a strange tradition/offbeat event? What is it? Have you participated in it? Do tell.