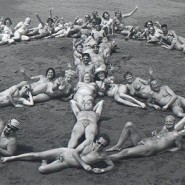 It was more than 15 years ago that I first experienced Wreck Beach – a long recognised, well-established nudist beach in Vancouver – there’s even a book chronically the beach’s history.

A few months ago I returned for a second time to discover a more sophisticated beach – while still retaining its hippie heart – in it’s offerings of mixed drinks alongside a medieval fair of tents selling food, sarongs, massages and impromptu music. (Not too mention my swim with a seal!) 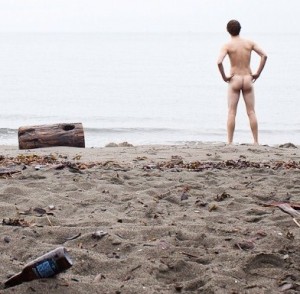 Nudism, I appreciate, is not for everyone. But that’s one of the first things that struck me about this inclusive beach on my first visit: that despite it being a nude beach you didn’t have to go naked, if you didn’t want to. Those patronising the beach were mix of ‘au natural’,  half-dressed and fully-covered in swimwear.

About the only thing that’s not excepted is to be fully dressed in street clothes. That’s just creepy.

All ages too were in attendance. I distinctly remember sitting next to a grandmother who was there with her granddaughter, and me thinking ‘how cool is that?!’  The range of ages gave the place an unparalleled sense of community.

The other distinctive memory I had from my first visit was how cool it was that the drink sellers wandering the beach were also naked except for their bum bag/change purse clipped around their waist. I don’t know why that struck me as odd. The alternative, had they been dressed, would likely have been odder. 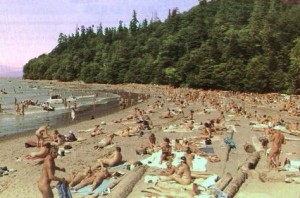 Last month’s return was no less impressive.  In fact, it seemed the beach had grown substantially in popularity. Drink sellers were still there, still naked but for a change purse, but their menu was far more sophisticated than the beer and Cokes of yesteryear. Now it included mixed margaritas alongside gin & tonics made with brand labels like Bombay Sapphire.

The place had a lively circus feel to it.  A medieval fair even. With lean-to tents sent up along the back of the beach; their fabric walls billowing in the breeze. Here you could shop for food, sarongs, even step into a

private enclosure for a massage.

For the most part people were naked. And I marveled how similar we all look without clothes. A revelation of sorts. “Despite our different sizes,” I thought, “we all have the same basic shape and it’s only clothes that draw attention to attributes – a bigger bust, a narrower waist – and accentuate our differences.” 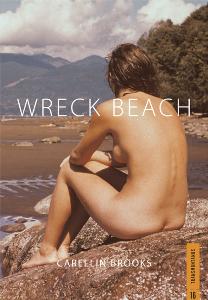 There were a few clothed people on the beach – known locally as ‘textiles’ – and an even stranger addition: uniformed police patrolling, looking oddly out of place as they monitored alcohol consumption on the beach – which was illegal, and yet so blatantly indulged in. I found it confusing. But perhaps some questions are better not asked.

I played Frisbee with a friend, working up a sweat in order to bravely enter the chilly waters. (Sorry Vancouver, I’d love to say they were warm but bracing is the best I can offer.) Despite my whinging and the torture of slowly sloping sandy bottom, I did make it into the sea and was rewarded with a seal swimming within 5 metres of me. (I thought it was a dog at first and when I realised it was actually a seal  I couldn’t contain my excitement!) 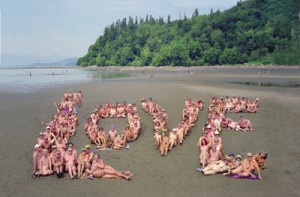 The end to a perfect day? Almost! The cherry on the cake was the impromptu music/jam session we got caught up in before leaving the beach. Revellers were adding their instruments, their voices, or simply clapped to an impromptu beat and melody that was collectively contributed to and singularly enjoyed.