Not only am I a big believer in trying everything once – and going back for seconds if you like what you’ve tried! – I also believe in revisiting those things you think you don’t like.

Why? Because tastes change, because your second opinion can be different from the first, and if you hadn’t guessed already, I like challenging myself and my perceptions so I don’t get stuck in a rut of habit.

In a world of coffee drinkers I am the odd man out. I don’t drink coffee. I love the smell – the aroma is intoxicating – but I dislike

the taste. The bitterness of coffee constricts my tongue and wrings it out of any moisture. Simply put: Yuck.

I know in most people’s books this makes me a freak of sorts, a social outcast worthy of dirty looks from those who can’t comprehend why I’m not joining them in their ‘morning cup of Joe’.  Then there’s the suspicious looks from friends who feel duped by the fact that I’ve invited them out for a ‘coffee’ but don’t drink one once we’re together.

In my defense I do like chocolate. Hot, cold. Bitter, sweet, White, milk, dark. But that doesn’t cut it with coffee drinkers.

Once on a hot summer’s day in New York, back in the early days of Starbucks and its myriad of milkshake-like drinks somewhat deceivingly named (or to be honest, my naivety) I ordered what I thought was a chocolate milkshake – a Frappacino – which I didn’t realise at the time actually contained coffee. I was wired. To the tips of my fingers. Not used to caffeine I was a bundle of jitters, not helped by the fact that I was behind the wheel driving the streets of Manhattan. I couldn’t wait to get home and eat bread. It was the only thing I could think would soak up the caffeine.

A friend of mine, EarlyAdopter, is a coffee aficionado. He challenged me as The Experience Junkie to wake up one groggy morning and drink a cup of drip coffee.  So never one to pass up a challenge I dutifully took myself down the local coffee shop and explained to the barista that I wanted a drip coffee but nothing too strong – think he must have thought I was crazy.

I’m not sure what I ended up with, but I have to admit to watering it down with milk and loading it up with sugar. Then I went and sat on a park bench and waited for the fog to lift, for my wit to sharpen and my gears to spring to life. 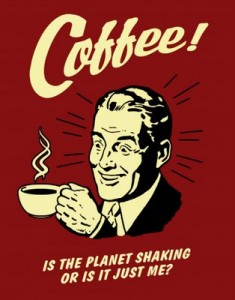 So I tried again a few days later.

This time EarlyAdopter made the coffee, ensuring the coffee was stronger. (I wasn’t allowed as much milk, but I snuck the sugar in all the same.)

Again, I waited for that ‘kick’ that I’ve heard so many talk about, that burst of energy and mental acuteness. We sat down to talk. We were in the middle of conversation when I got a ‘kick’ … not in the head but in the stomach. I had to race to the loo for a sudden evacuation.

Where’s the fun in that I thought? 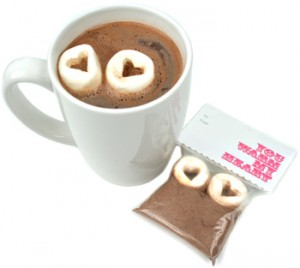 I returned to the conversation and it happened again, with as much urgency that once again I stopped mid-sentence and made tracks.

By this point I actually felt a bit ill and had to lay down for  an hour until my stomach settled.

The final insult: That night before retiring for the evening.  I pee’d and my pee smelled of coffee.

So just to let you know world, I am leaving coffee to you. Coffee aficionados rejoice because there’s more for you. You can have my share: make mine a hot chocolate please.