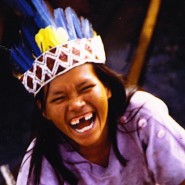 To date there have been 25,000 confirmed plant species, 2,500 fish (a third of the world’s fresh water total), 10 per cent of the world’s bird species, as many as six million insect species found and up to 2,000 butterflies cataloged. Is it any wonder that nature challenges the norm here?

The river itself pushes nature’s boundaries. Even after two weeks of exploring the Amazon, it’s still hard for me to appreciate the enormity of the largest river system in the world. The statistics are boggling. With 1,100 tributaries carrying one fifth of the world’s fresh water the Amazon’s Atlantic outflow is so great that fresh water is found some 200 km from the mouth allowing thirsty fisherman to drink from the ocean.

It’s hard to put in to perspective a tributary the size of the River Thames being referred to by locals as a stream! Or the fact that the Amazon’s largest tributary, the Rio Negro, is the second largest river in the world with a discharge three times that of the Mississippi, or greater than all the rivers of Europe combined  – yet it only provides 15 per cent of the Amazon’s total volume.

A highway made of water. A river full of soil, and a land full of river. Trees in the water and water in the air. Birds that walk on water and four-eyed fish perched in trees.

The Amazon river is the lifeblood of the basin. It’s silt-carrying waters a liquid highway for people and commerce. The river is much quicker and more reliable than roads through the muddy jungle. In fact, for many towns along its banks the river is its main connection to the world. From Iquitos, tucked 3,000kms inland from the Atlantic, it is faster to get to the ocean than it is to travel 1,100kms over the Andes to the country’s capital, Lima.

While the Amazon is navigable year round by local ships, cruise ships can only travel during the flood season which peaks around the first week in May and reaches a low around the third week in November. Not that the flood waters promise smooth sailing, the Amazon offers its own curl ball – due to the constant shifting of silt during the flood season, accurate maps of the river’s channels have a life of one month.

It is this flooding that provides the Amazon’s cycle of life bringing nutrient rich minerals down from the Andes. The river, climbing its banks by up to 36 feet, floods the surrounding plain. Trees are submerged and fish have a whole new playground to explore. Birds like the jacana with it’s elongated feet delicately walk atop lily pads and graceful white egrets can be regularly seen riding the flooding meadows of water lilies down stream.

Cruising along the river and its tributaries during our daily Zodiac tours, the water became our hiking trail as well, allowing us to explore the vine tangled canopy of the jungle while below us fish perched in tree branches eating seeds and berries.

In the Amazon, as many as 200 species of trees and fish are interdependent for survival. During the wet season many fish rely on trees for food, and in turn take on the role of seed spreaders played by birds in other ecosystems.

One of these fish, the Anaplaps has been blessed with four eyes allowing it to see both above and below the water at the same time when looking for foliage food and watching for encroaching enemies.

But not all fish in the Amazon River feed on foliage. Famed for their ferocity you may be surprised to learn that while piranhas are cause for concern, of the 20 different species inhabiting the Amazon only five are carnivores. The other 15 are vegetarian.

A fish demanding more respect by wary locals is the candiru acu. A minute catfish, the size of a toothpick, it is attracted to uric acid and will lodge itself in a bather’s urethra by spreading its thorny spines outward once inside. Extraction by surgical removal is excruciatingly painful. Failure to do so can lead to death.

Oddly enough, another fish feared by the locals is the pink dolphin. Two kinds of fresh water dolphins inhabit the Amazon: the playful gray dolphin familiar to the West and unique to the Amazon, a larger, shyer pink dolphin which gets its amazing pink hue from numerous capillaries near the surface of its translucent skin.

Within Amazonian culture these dolphins are considered promiscuous, even evil. If a young, unwed village girl happens to fall pregnant a pink dolphin is often blamed. In some Brazilian villages pink dolphins have even been listed on birth certificates as the father to the newborn.

Pink dolphins are also recognized by locals for their aphrodisiac properties. In Belem’s exotic Ver-O-Peso market dolphins’ eyes are sold to young women as love charms that will entrap young men by simply pointing the eye in their direction.

Native villages with satellite dishes, huts with ghetto blasters. Oh! and opera in the jungle. 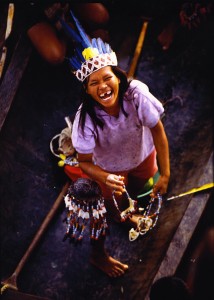 It is not all superstition and fancy for the 143 different forest peoples living in the Amazon. (An excellent natural history museum in Alter de Chao charts the cultural history of local Indian tribes which are rapidly disappearing.) Many villages have embraced the present – indeed one of the most curious sights while traveling down the Amazon are flood fending houses dwarfed by an adjoining satellite dish!

Fancy a spot of Opera deep in the heart of the jungle? Manaus, a city of one million in the middle of the Amazon, has been home to an Opera House since the turn of the century. Overlooking the city’s moldy high-rises, the Opera House stands as a testament to the wealth of European rubber barons during the boom of the late 1800s.

At the time, rubber export made Manaus the most expensive city in the world. A chicken cost $27 and a handful of carrots $9!. So wealthy were these rubber barons that rather than risk soiling their clothing in the muddy Amazon waters, they sent it to Europe to be laundered – even though it took two months to return.

Manaus sits on the Amazon’s largest tributary the Rio Negro. Referred to as a black water river, very little lives in it. It’s dark tea colour a result of the tannins left behind by rotting leaves. Oddly enough the café au lait coloured Amazon is referred to as a whitewater river.

Just down from Manaus, the two rivers meet but stubbornly refuse to mix for some 20 km – running side by side – their different colours forming a distinct contrasting line in the river. It is the volumes of water of these two rivers meeting that inhibits the consummation of this wedding.

The jungle is as much a part of the Amazon as it’s river. The rainforest teems with life on all levels, from the jungle floor to the canopy. Trees, with buttresses large enough to engulf a person, strive ever upwards to the light; clinging vines and climbing figs go along for the ride – often overtaking and strangling their host but leaving a crisscross construction of vines that create a trunkless tree.

As the competition for space in the canopy becomes fierce, the walking palm uses its external roots to slowly ‘walk’ around the jungle in search of light by literally picking up its roots and moving on.

Rubber trees still abound. Trunks crisscrossed with scars, evidence they are still being tapped for sap. Chocolate trees also grow in the jungle. Although, their green pod-shaped fruit looks nothing like the sweet brown bars we in the West have come to love.

Locals instead prefer a diet staple of manioc – a native plant full of cyanide. Much time and energy is spent drawing out the deadly cyanide harbored within. The plant is first squeezed and pressed to remove any moisture and is then slowly fried in large, shallow communal pans. The result a yellow floury substance resembling corn maize.

The Amazonian fauna is equally as deceiving as it’s flora. One whooping sound echoing around a small flooded field we had ventured into led us to believe that a monkey was nearby until our guides explained that it was the deceiving croak of a frog.

On the other hand, we were regularly treated to flashes of Squirrel Monkeys playing in the canopy. Easily heard but too quick to be seen

Another sound regularly startling us on our daily Zodiac tours were large splashes in the water. The culprits? Dive bombing lizards, who climb trees in order to sun bake, but take the high dive into the river’s safety when threatened.

And what does a threatened tree do for protection? Many trees in the Amazon have their own line of defence: army ants. Some trees have made contracts with ant colonies by offering a home in exchange for protection. What this means to any hapless tourist or unsuspecting animal who happens to brush against the tree or worse yet, grab onto it for support, is an immediate onslaught of biting army ants.

On a jungle walk one day we came across a long line of large industrious ants dwarfed by their even larger load of leaf cuttings. Not vegetarian ants, but mold eating ants. The ants harvest leaves, add them to a pile of rotting leaves and feed off the cultivated mold.

Feeding off blood, the Amazon is home to the world’s only vampire bat. They land at night on sleeping mammals, including humans, making a small painless incision with razor sharp teeth and then lick the blood that flows from the wounds. Small concession to the fairy tales, the blood is not sucked.

Of course everything is big in the Amazon. Spiders become tarantulas. Snakes become anacondas. Beetles become rhinoceros. Well not quite, but the rhinoceros beetle is another curious Amazon oddity. Fitting in the palm of an adult hand, the black beetle has an up-turned nose horn that gives it its name.

The world’s largest fresh water fish, the Piraruca, also resides in the Amazon. But for this King of the River there is no dignity in death. Its coarse, dried scales are used as fingernail files by native women.

Nature challenges our perceptions in the Amazon. It is a world of wonders with much to explore and much that remains undiscovered. I never did manage to see the infamous Amazon warriors after which the region and river were named. But that’s because there never were any. Early European explorers mistook the tall Yagua Indians wearing grass skirts for the legendary Amazonian warriors that the Old World had convinced itself existed.