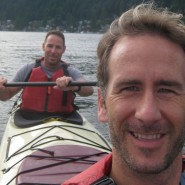 First up, I have to ask: Who has missed a flight or conversely gone to the airport one day early simply because you didn’t properly look at your flight itinerary and thought your departure day/time was something entirely different from what it was? (Please share.)

This was the case yesterday for a friend who was certain that he was flying to Europe that evening – having taken the day off in preparation for his departure – only to discover he’d got the day wrong when he tried to check-in online. The computer said “No”. His flight wasn’t until the next day. 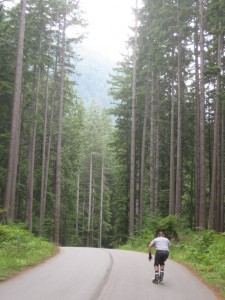 Obviously, it’s better to mistakenly think you’re flying one day earlier than one day later, but rather than get frustrated or disappointed things weren’t going to plan, we embraced the day and ensured that his holiday started right on time – only here, at home, in Vancouver. (He could do that ‘European thing’ tomorrow.) 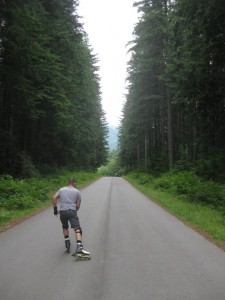 And so we embarked on a day of excellent adventure.

First up, a rollerblade through the stunning Lower Seymour Conservation Reserve – a very cool out of the way park on Vancouver’s east North Shore. Essentially an old logging road that’s been paved over it cuts straight through tall growth forest. For cyclists there are plenty of other dirt paths on offer that meander through the woods and along the river, but as bladers we kept to the well-maintained central paved path.

A 10 km one-way road (with no loop, so you have to return the same way), we virtually had the place to ourselves. Blading through the forest was a treat and a good workout with a number of challenging uphills (more so on blades than a bicycle) along with the thrill of racing down the other side (experienced and confident bladers only). We went 5 km in and turned back for a 10 km round trip. Apparently, it’s not uncommon to see wildlife wander out of the dense forest on either side of the trail, but unfortunately we weren’t so lucky.

Next up, a must-see destination for anyone visiting Vancouver: Deep Cove. A sleepy little fishing town that feels more like a holiday outpost despite being on the edge of Vancouver.

One spontaneous decision later, we were strapped into a double kayak and paddling out amongst the impossibly-still, glassy waters to discover the true scenic beauty of Deep Cove and the Indian Arm River.

We heard word of a seal surfacing via the excited cries of other kayakers, but sadly every seal we thought we saw turned out to be a piece of bobbing driftwood. Still the beauty and stillness of the place overwhelmed. Large homes clinging to the shores were dwarfed by the fir-tree lined mountains above. Our brief tour up Indian Arm River was rewarded with mountains that folded into each other into the ever-bluer distance. 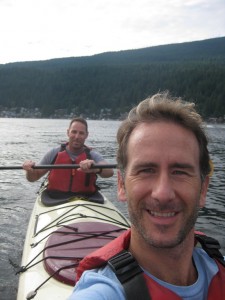 After circling a couple islands and skirting the coast for a sticky beak into the some of the lovely waterside homes we paddled back into Deep Cove after clocking up roughly 12 km … a well-oiled machine (more like well-saturated in sea water) – tired but setting a fast and rhythmic pace, intent on impressing any onlookers with our paddling skills as we glided back into shore.

A well-deserved pizza later we were on our way back to Vancouver, having not let something as simple as day gained due to a misjudged flight go to waste when there were holidays to be had. I joked that perhaps we should do it all over again today to ensure my mate slept on the long haul flight but he was happy to be back on track and let the excitement of today’s impending trip to Europe be enough to fill his day. 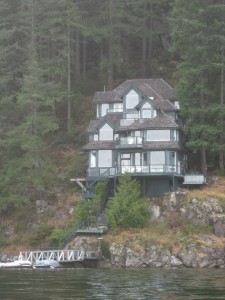 An aside: There was a time when I found myself flying via Vancouver from Toronto/New York back to Sydney with some regularity. Never one to let a ‘stopover’ go to waste, I would make a point of organising an earlier flight into Vancouver so that I would have enough time to leave the airport and get downtown. At which point I would rent rollerblades and go for a double circuit around Stanley Park’s seawall. It was a great way to stretch my legs between flights. I’d return the blades, return to the airport, hop on my onward flight to Sydney and be suitable exhausted to sleep soundly all the way home.

Found yourself with a unexpected day up your sleeve (rather like finding a $50 note on the ground), how did you spend your windfall? And what about misjudging a flight by either a day early or late? I’m sure there are plenty of stories out there, please share.