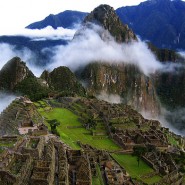 Note: I had been a journalist and a traveller concurrently for a number of years – attacking both with equal but separate passion – when a good friend of mine, a travel editor for House & Garden asked me to write a story about my upcoming adventures in South America. It was my ‘aha’ moment. Before that point I had never thought to combine the two things I loved to do most – writing and travelling. That marked the beginning of my career as a travel journalist and this my first travel article.

Wandering 8,000 km down the western side of South America, the Andes rise from the humid jungles of Venezuela to host the world’s highest capital in Bolivia, then stretch down to the tip of the continent to touch Ushuaia the southern most city in the world. Here’s my brief guide to South America’s spine.

South America was the last continent I had yet to set foot on. I knew very little about it’s attractions, so when a friend suggested a three month trip along the Andes, the backbone of South America, I was a little more than hesitant asking quite frankly “What’s there?” The answer: mountains of history housing a wealth of cultures and some incredible sights. (Note: Consequently I’ve been back to South America roughly 5 times, and it’s one of my favourite continents to visit!)

In order to get into the rhythm of the continent I enrolled in both Spanish language and Latin American dance lessons. Time well spent as English is a scarce commodity in South America and little salsa never goes astray.

Our adventure began at the northern tip of the Andes in the Venezuelan town of Merida. It’s one tourist attraction, the world’s highest and longest cable car doesn’t work but most guidebooks neglect to tell you this.

Fortunately, the real attraction of Merida lies in the small mountain pueblos or villages surrounding it. The most touristed, Jaji (pronounced Ha He), is a typically simple town whose cobblestone square is a sleepy place where you’ll more likely to see a laden donkey wander past than a car.

The Andes continue into Colombia, breaking into two distinct mountain chains running north-south. It is from these ranges that many of the treasures showcased in the capital’s premiere attraction, the Museo del Oro (Gold Museum), were recovered.

Recognised as one of the most important museums of its kind, room after room is filled with gold artifacts dating from pre-Hispanic cultures. En mass the gold display is incredibly impressive, even more so when you remember that the collection represents only what the Spaniards left behind.

The museum provides a stark contrast to the poverty that exists outside its doors. The poverty of the northern Andean countries is a problem that has led to an increase of thievery and it was in Bogota, Columbia’s capital that my mate and I mistakenly wandered into one of the city’s mushrooming shanty suburbs and were mugged.

South America cities can be dangerous places, but common sense and good travel insurance will stand you in good stead.

Further south in Columbia, San Agustin is a good escape from the hustle of Bogota and an excellent place to sample the local crops: bananas and coffee. It is also recognised for its important archeological sites which are littered with stone monuments and large underground tombs left behind by civilizations dating back to the 6th and 14th centuries.

South to the Columbian border with Ecuador, near Ipiales, is a modern day monument to the Virgin Mary.

Earlier this century an image of the virgin Mary appeared on a rock 45 m above a deep ravine. A neo-Gothic church was constructed on a specially built bridge with the rock where the image appeared forming the main altar. The Santurio de Las Lajas is now a pilgrimage for many South Americans, with a number of miracles are attributed to the rock.

Across the border in Ecuador, the continent’s smallest country, the Andes become larger and drier, dividing into two volcanic chains separated by a broad plateau.

Under the shadow of the Cotacachi volcano, the town of Otavalo is famous for its Saturday Indian market dating back to pre-Inca times. It is here that with local Indians wearing traditional costume – men with a single, jet-black plait down their back and women colourfully decorated with gold glass beads denoting their marital status piled high around their necks – you begin to feel that you entering the heart of South America.

It was in Otavalo that I enjoyed a platos typicos – fried potatoes with guacamole and red onions. A good reminder that the potato has been the Andes’ gift to the world. But for the most part the food in South America, leaves little to be desired.

Ecuador’s capital Quito, second highest in the world, is worth a look for its European styled old town. But pollution and steep winding streets don’t make for a warm welcome.

For those with a finger in every pie, why not a foot in each hemisphere? The equator, an easy 22 km from Quito, sits in a barren valley marked by a monument, museums and a red line.

The Ecuadorian Andes offer some of the highest peaks in the Andes. While mountaineers can delight in climbing, organised tours ensure that the mountain peaks are not the exclusive domain of the professional.

If hiking sounds too much like hard work, for a more relaxing taste of Andean life head to Banos (meaning baths), where true to its name you can relax in your choice of several natural hot springs at the base of snow capped Tungurahua mountain. Banos is also one of the gateways to the Amazon. 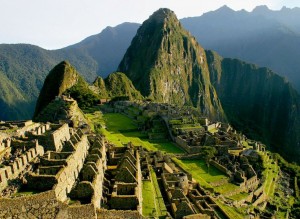 In the Central Andes of Peru, three south-east ranges meet the altiplano (high plateau) on the Bolivian border. It is near here that one of South America’s most famous sights – and deservedly so – resides. The lost city of the Incas, Machu Pichu, is a testament to a people whose ingenuity in masonry, irrigation and step farming helped them conquer the heights of the Andes and make them their home.

Cuzco is the jumping off point for those interested in visiting Machu Pichu. An attraction in itself, this old Inca town conquered by the Spanish melds the architecture of the two civilizations – sometimes in the same building!

Purchasing a Peruvian air pass outside the country, makes internal flights cheaper and easier to bridge the distances in this large arid country. But don’t neglect local transport entirely. One of the best trips we took was the train journey from Cuzco across the barren alti plano to the shores of Lake Titicaca – the birthplace of the sun according to old Inca legend and recognised today as the world’s highest navigable lake.

Shared between Peru and Bolivia Lake Titicaca, at 3820 m, 170 km long and close to 100 km wide, is home to the Uros people who, using the abundant totora reed, have not only created floating islands to live on, but also use the reed to construct their houses and boats.

Less than 100 km from the southern shore of the world’s highest lake is the world’s highest capital, Bolivia’s La Paz. A crater in the altiplano 400 m deep and about five km from rim to rim, the city of La Paz is like nothing you will see anywhere else – literally a bowl in the earth filled with a city with houses climbing each side.  Women in large petticoats and bowler hats that appear just a bit too small, wander around the city centre along with the corporate set.

Any ailments? Don’t neglect to check out the weird and wonderful cures at the witches market.

Rising above La Paz, snow covered Mt Chacaltaya (5600 m) a defunct ski area is still worth a visit for its stunning views that reach as far Bolvia’s border with Chile. When reaching for the sky, don’t forget sunglasses to ward off the unforgiving sun. Be aware of altitude sickness.

Next door, Chile is a country where you’re never more than 200 km away from the Andes. The country’s lake district is one of most popular places to enjoy the mountains. A trip to the rim of an active volcano is easily arranged, but the lake district lends itself more to strolls through the mountains – that is if it isn’t raining.

Back in Argentina, one of the most incredible sights in South America for me was the Peurto Moreno glacier hiding in the cone of continent. Weaving its way down from the Andes, the face of this aqua-turquoise glacier fronts onto a hairpin bend in a river. The glacier regularly thunders with the sound of its slow movement forward as 80 m pieces of the glacier calve off and plunge into the water below with mighty roar. A day well spent.

As they reach the end of the continent the Andes lower and curl around the islands of Tierra del Fuego playing harsh host to the southern most city in the world, Ushuaia. A moody place where the sun never seems to completely leave the sky during the summer months, Ushuaia is an excellent jumping off point for trips to Antarctica. The city itself is a place of history, sharing a convict history similar to Australia when the town was once used as a penal colony by the Spaniards.

Have you had an ‘aha’ moment when you’ve been able to combine two passions into one?