Home » Be Present » Life Got in the Way

Life Got in the Way

So here I was a couple of months ago humming along quite fine. My life had rhythm, it had structure. I was writing regularly, I was getting to the gym – gaining weight – eating healthily, sleeping well, and challenging myself by learning Spanish here in Guatemala. Most importantly I was content.

That was the last time that most of you would have heard from me.

So much has happened since then. Chaos, sleepless nights, new challenges, adventures – each deserving of a post/story unto themselves – but suddenly I found myself a juggler with too many balls in the air and I had little choice but to let some of them fall to the ground. One such ‘ball’, my regular updates on The Experience Junkie, unfortunately fell to the wayside.

So here I am recognising that despite best intentions, despite deep desire, that when you’re a staff of 1 you can’t always walk a steady path free from interruption. And that sometimes momentum is interrupted when life gets in the way.

So here’s what I’ve been up to in my ‘silent’ few months. 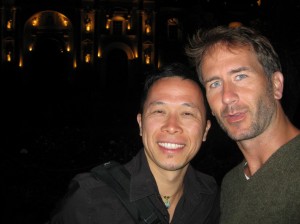 It started innocently enough when I had two dear friends visit independently. I didn’t even notice the distraction from my schedule I was so happy for their company that I treated their visit like a holiday of my own. The first arrived in early March, the second three days after the first departed. If that weren’t exciting and a handful enough, during the second friend’s visit a street puppy walked into my home at 3am in the morning (we’d been out nightclubbing). With a bloated belly (from worms), the barely two month old pup was filthy and had what appeared to be mange-y 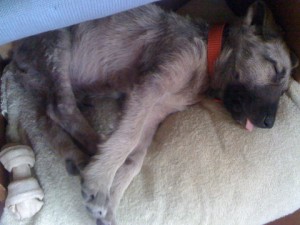 fur and dry skin more akin to an old elephant than a young pup. After a sleepless night due to the pup’s crying from his incessant scratching I took him to the vet and somehow became a dad. He went everywhere with me; quite content to ride in my mail bag. Within the first 72 hours he’d been to the beach, to the lake – ridden in a car, a bus, on a boat. It took awhile to find the right name for him, but I called him Cenizo. It which means ‘ash’ in Spanish – in reference to all the volcanic ash about Antigua, but more importantly in reference to his unique grey fur. Then he went 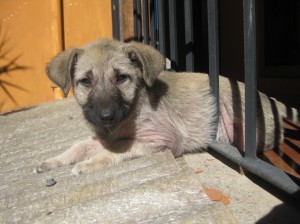 and turned blonde on me .… but more on the pup another time. (Btw, a future story spoiler, but he’s curled up at my feet as I type this.)

(Shout out to parents: I realise a dog is not a child – at least a dog can be left alone for short periods of time – which makes my newfound admiration of parents even greater! How do you do it?!)

Following my second friend’s departure, I left the now growing pup in the care of a good friend and headed off to tackle a new country, Honduras, in order to 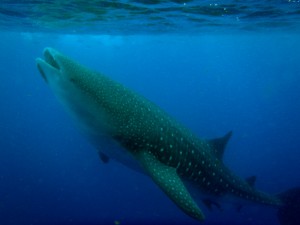 fulfil a long held dream of swimming with whale sharks. It was the height of whale shark season and swim with them I did – almost getting whacked by the tail of a 10m whale shark as it turned to avoid the onslaught of a phalanx of divers swimming straight for it. Whale sharks I’ve since learned are incredibly timid – unfortunately it seems no one had told the divers … but more on my whale shark encounter another time. 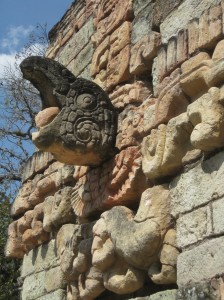 Honduras also offered up a couple of other discoveries. The Mayan ruins of Copan, not to mention the discovery of the charming adjoining village and a day riding horses through the beautiful countryside on a coffee farm, Finca El Cisne.

Back to Antigua in early April only to discover that my best mate here had decided to pack up his bags to return to Australia due to some persistent health issues. There was much moving and sorting through his life lived in Antigua in order to pack it into two bags. Somewhere along the way, without recalling that I actually said yes, he bequeathed his two English teaching jobs to me so that I might keep them ‘warm’ for him should he be able to return. 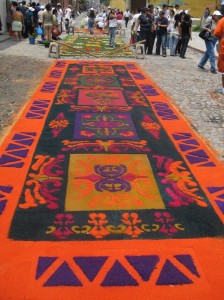 He left just as the craziness of Semana Santa or Holy Week started in Antigua. Outside of Seville, Spain, Antigua holds the largest Semana Santa festival in the world. The city was inundated by visitors. Roads gridlocked with cars, sidewalks too full to walk along. All to see the daily (if not twice daily) religious processions that have the pious carrying huge statues of Jesus and Mary in parades that weave around the city for a full day OVER top of meticulously crafted carpets of flowers, dyed sawdust, vegetables etc  that cover the cobblestone streets .… but more on Semana Santa in Antigua another time.

I escaped Semana Santa briefly to go to Rio Dulce in the north of Guatemala with some friends. The trip would have been 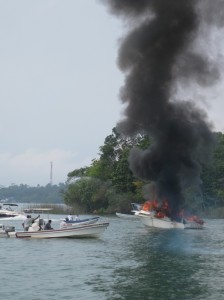 relatively relaxing and uneventful had it not been for a wild injury-causing ride across rough seas that closed in quickly … and an exploding boat mere meters away from where I was washing my street pup, Cenizo, in the river. The two-level luxury yacht burned for some three hours before it resembled nothing more than a rowboat and then sank.

With Semana Santa over, the crowds returned home and the town quiet again I found myself even more alone in Antigua … my mate and gym partner having returned to Australia. Except now I had a new challenge … teaching.

(Shout out to teachers: You are a breed apart and deserve far more credit and admiration for the job you do in what at times must seem like an uphill battle against students, parents and the administration. And yet you persevere! I 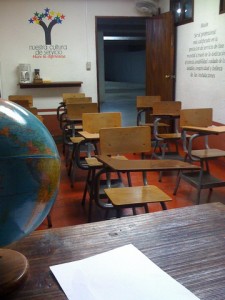 bow in awe and admiration.)

I was working not one but two English teaching jobs during the day in addition to writing magazine articles at night. Easter Monday saw the first of the two jobs tackled; working a split shift three days a week at a beautiful five-star hotel here in Antigua teaching the staff English. Tuesday I started working at a high school teaching English Reading, Writing, and Speaking to five different classes (roughly 80 students across the ages of 14 to 18). Talk about jumping in the deep end. By Wednesday I was doing both jobs – getting up at 5am to feed/walk the puppy, get myself ready, then eat breakfast to get to the hotel by 7am. By 8am I was running across town to catch the 8:20am chicken bus to school (it literally had chickens on it the first day) to JUST walk into my 8:45am class as the bell rung. By early afternoon I was 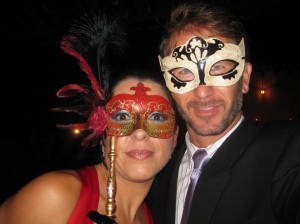 back on the bus and running across town again to get back to the hotel to teach two or three afternoon classes. I’d finish by 5pm, get home to walk the dog again, make myself dinner then work on my magazine writing before collapsing into bed. I learned exactly how much you can fit into a day – unfortunately it came at the expense of my gym, proper eating, and restful sleep as well … but more on my teaching escapades another time.

There were a couple of reprieves from my teaching marathon: a Masquerade Birthday Ball, and a energetic football match in which the home team won. I also managed to escape for one weekend: at the invitation of a friend, we went on a driving trip to discover a new country, neighbouring El Salvador. A scenic

country as a whole, but there wasn’t really one thing that jumped out with a wow factor. We did discover a lovely waterfall … but the experience was somewhat marred by an hour at the border trying to avoid a hefty fine and five days to leave the region because the border officers felt my valid visa was invalid … but more on my Escape from El Salvador another time. 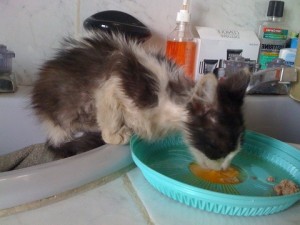 You can now call me crazy: Upon returning from my morning walk with Cenizo on Mother’s Day, I saw an emaciated kitten of what looked like 3 weeks old (he was actually 5 wks – but so underweight that he looked younger) sitting outside my front door. (Word had obviously gotten out that a sucker lived at this address). I told myself repeatedly – “Michael, just go inside the house, just go inside the house.” And that’s what I did – with the kitten in my arms. (I’m pleased to say some two weeks later he’s gone from 1lb to 2.5lbs). He looks like a skunk so I called him 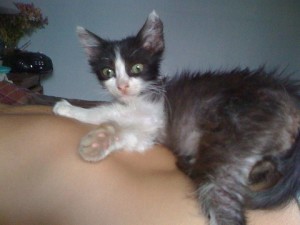 After three weeks of working at the school I politely declined their offer to continue working for them. I had had enough of arguing with students, tired of saying no to repeated requests to go to the bathroom, and tired of asking for quiet only to have it interrupted mere moments later. One student asked me if I was learning anything at the school. Patience I told him, I learn about patience every day.

I still teach English at the hotel three days a week. The people there WANT to learn so the work is rewarding. But now with more time up my sleeve I can turn my attention back to my writing and start thinking about what to do next!

So there you have it, the last 12 weeks of my life. Full, frustrating, rewarding, boundaries pushed, lessons learned, adventures had and experience gained. Apologies again for my delayed correspondence, life got in the way.