Why talking about your bowel movements is common conversation on the road – and how I narrowly missed falling into the toilet!

Fingers crossed, but I think I may have just bested my second stomach bug here in Guatemala. Round Two: Winner MSW.

My first, when I was here in early December, gave me a beating I will long remember. It was a knockout; one that had me glued to my ringside seat day and sleepless-night. (Yes, I’m trying to be clever and funny here.)

This second bout had me concerned that the fight would be as long and drawn out as that December round. It took great courage on my part not to throw in the in the towel and race to pharmacy with my previous prescription. (I’ve been faithfully carrying it around in my pocket in case I saw myself going down for the count again. Yes, it helped me win the fight last time, but my preference is not to take antibiotics.)

The December Round was a nightmare: I couldn’t believe how much water my body was capable of producing. I was afraid of eating for fear of fuelling the fire, or in my particular case, dousing the flame; and I was afraid of passing gas for fear of soiling my pants!

Here I am sharing in a very public forum (as I did on a daily basis in December with my then-travelling companion) … and it got me thinking how normally our bowel movements are tightly held secrets, too taboo to even to talk about, but once on the road there’s no shame in sharing. In fact, we’re prone to offering daily updates with friends, strangers even, as if they care to know. 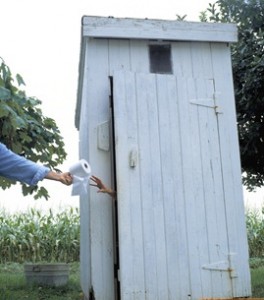 Years ago while travelling through Africa, my two travelling companions, one a good friend the other destined to be one of my best friends (I just didn’t know it yet) had some stomach issues. (For the purposes of this story let’s call them: The One-Who-Couldn’t and The One-Who-Couldn’t-Stop.) Each morning I would be privy to their conversation about the status of their bowels. Sometimes their exchange was as simple as “Did you?” “Nope.” “Have you?” “Yeah.” But often the conversation became increasingly graphic. The One-Who-Couldn’t-Stop employed consistency descriptors like ‘sludge’, ‘chunky soup’, and ‘an explosive fountain of water’; while The One-Who-Couldn’t elaborated on her constipation by sharing details of her bloated-ness, the amount of gas passed, her cramps and what it felt like to be sealed so tight that she felt she could ‘pop’ at any minute … and this all around breakfast time.

Why is it OK to share these details on the road?

You might think that my life of travelling has hardened my stomach to a steely resistance. Sadly, I think it has had the opposite effect. Mine is a little travel weary and seems to have less and fight in it each time it comes under attack. (But then perhaps I’m short-changing it for all the silent fights it’s won that I’ve been blissfully unaware of.)

There was this time in Indonesia, in the town of Solo – I’ll never forget the name because everyone was solo/single and proposing marriage! – that was seriously ill. Another stomach bug that was robbing my body of fluids and nutrients leaving me weak and feeble. I should have gone to the doctor’s much sooner, but I wasn’t as smart then as I am now. 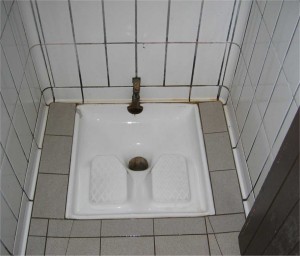 Wrapped in a sarong I shuffled my way down the hallway of the hotel I was staying at to the ‘squat’ toilet – one of those toilets without a seat, it is simply a porcelain depression in the floor with two ‘elephant ear’ footprints to stand on, squatting down on your haunches to evacuate into the draining hole.

Anyway, upon finishing my business in the tiny little wash closet I stood up too quickly, and in my dehydrated state I started to black out. “No. No. No!,” I thought. “I am NOT going to faint into the toilet.” That’s the last thing I remember. But I must have been successful in opening the door to the loo because when I regained consciousness I was laying on the floor outside the bathroom with the Indonesian chess players sitting in the hall looking at me like I was from another planet. (I’ve often thought what it must have been like from their perspective: about to declare chessmate when a naked white guy comes tumbling out of the bathroom and falls flat on the floor!) I gathered my sarong, regained my decency and was taken off to the hospital for a needle in the butt, some intravenous fluids, and a marriage proposal from the nurse.

Do you have any Travel Toilet Tales to share? Don’t be bashful, you’re amongst fellow travellers here.