Home » Be Present » Dining on a Bridge

Dining on a Bridge

For me, life is always sweetest when it unfolds to reveal a surprising treat that I hadn’t planned on but have the opportunity to savour.

I’m always amazed how often these opportunities present themselves – sometimes it’s a case of stumbling across them, while other times it’s about seeing something in the distance/out of the corner of your eye and altering course to investigate further. Once there, there’s usually a choice whether to engage (or not) and it’s at this juncture that I regularly say ‘yes’! 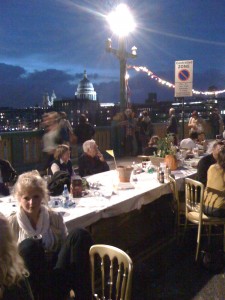 This happened a couple months back while wandering around London. I stumbled across the Thames Fair while crossing over the fluidly-designed Millennium Bridge (while being treated to a spectacular sunset over the Thames, I might add!) At first it looked like any other fair I’ve wandered through until I followed the trail of tents to the Southwark Bridge.

The bridge had been transformed into a big dining table – two tables actually: the bridge was closed to traffic and a line of trestle tables was along the length of the bridge, as far as the eye could see. Adding a festive feel to an already cool scenario, coloured lights were strung from lamp post to lamp post along the bridge. 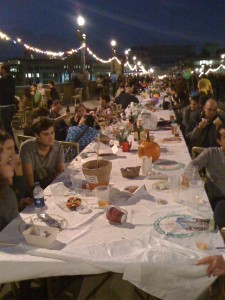 Nearby tents advertised everything from free range, organic, and even bio-dynamic food for sale, while the long shared tables engendered an intimate sense of community – strangers getting to know each other – as if it were a country town instead of the center of London. In fact the whole scene was reminiscent of pictures I remember of entire towns celebrating the Queen’s Silver Jubilee with parties and tables lining villages’ main streets.

Of course I sat down to enjoy the shared experience! I mean when’s the last time you can say you sat down on a London Bridge with a few hundred friends for a picnic??

(Yes, I hear you Sydney. For those of you don’t know, once a year Sydney has a Breakfast on the (Harbour) Bridge. Where winners of a lottery (it’s THAT popular!) get to enjoy a picnic on specially-laid fake green turf under the arches of Australia’s most famous bridge.)