I thought I knew London well and had discovered most of its neighbourhoods over the course of many visits, but here in the heart of London was a part of town I’d never ventured through before: The Financial District.

When I was in London a couple weeks ago a friend of mine, a television reporter with Bloomberg UK, kindly invited me along for a sneak peek into his daily workings as a financial journalist for the news channel. I jumped at the opportunity.  Thankfully he spared me his regular 4am rise and 5am arrival at the studio. I didn’t have to be there until 8 – and even that was early for me.

When I arrived, the Bloomberg concourse was abuzz with a flurry of scurrying employees pouring into the building and helping themselves to the open kitchen stocked with breakfast bars, fruits and hot & cold drinks. 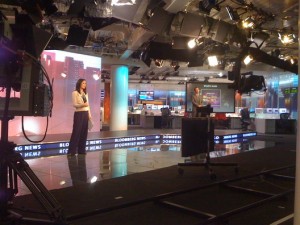 A few floors above via an inner glass staircase and past a mesmerizing aquarium (one on each floor) I was given a discreet seat to the side of the studio and ‘plugged in’ to the action with a wireless ear piece so I could hear the behind the scenes countdowns to commercial breaks and the directing producers asking the various reporters ad libbing to the camera to wrap up their reports.

Numbers are not my thing but it was hard not to take an interest in the financial markets and the state of the various European economies when the reports were so enthusiastically and thoroughly presented . (It also didn’t hurt to be treated to news that the Australian dollar was hitting a two year high against the British pound! See, I did learn something.)

I was also given a quick tour to the control centre a few floors below the studio where the producers sat, the same ones that had been counting down in my ear. It was fascinating to watch them calmly switch between the various cameras, tee up the advertisements, countdown the reporters to each new segment (particularly given that not every reporter finished within their allotted time), order up accompanying graphics and still keep the live show moving and on time!

Inspired to discover more and dressed the part in slacks and a smart shirt, upon leaving Bloomberg I went for a walk to the Bank of England and discovered the core of London’s historic financial district – a relatively treeless area, with winding streets (no doubt established during medieval times) along with an interesting array of buildings both traditional and exceedingly modern.