Home » Blog » The Honour of Voting

The Honour of Voting

Today I had the honour of voting in the Australian Federal Election.

It’s an experience worth writing about for the simple matter that I am lucky enough to be part of a country whose citizens have a say in choosing their government.

It’s an interesting election. Aside from the general talk over better hospitals and schools etc, the contentious issues have circled around immigration, reducing carbon emissions and gay marriage. Both leaders are well recognised faces within their parties but relatively new to the leadership roles. The incumbent, Julia Gillard, could be Australia’s first elected female Prime Minister (she has already been Prime Minister since June ‘10, but the role was delivered to her by a shift within her political party and not bestowed upon her by the Australian people.) 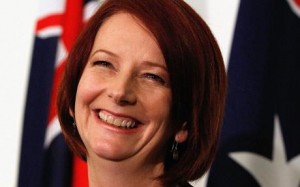 As The Experience Junkie I’m inclined to take the path less travelled and say ‘Give the girl a go! God knows we’ve had male leaders for the past couple centuries and not always been happy with the results. Let’s see what differences a woman can bring to the top job!” But that’s just my opinion.

Much is made of the right to vote, particularly in America, the self-proclaimed Land of the Free. And while I have many American friends who embrace that right with the responsibility it engenders by not only voting but studying the issues so as to make an informed choice (I’m thinking of you MusicLovingTravelMan!) it always astounds me how the majority of the population does not exercise their right to vote. 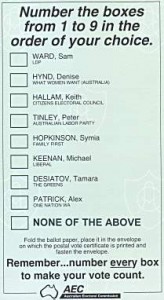 In Australia voting is compulsory. Whether it be at a Federal, State or Municipal level. If you don’t vote, you are fined or have to provide one of a handful of acceptable reasons as to why you weren’t able to reach the polls. (Oddly enough, being out of the country – as I am – is an acceptable excuse … that said there was a steady stream of people flowing through the Australia Consulate in Vancouver today under no other obligation to vote except for the reason that they wanted to.)

An aside: I had a friend’s mother argue once when I was younger that there was no ‘freedom’ in being forced to vote and that she had on occasion exercised her right NOT to vote even if it meant incurring the fine. That said, in fact, it’s not so much a law that you have to vote as much as you have to show up and collect your vote and hand it back in. Whether you choose to hand in a blank vote or purposely scratch it by filling it in incorrectly is also within your choice.

Voting is no easy task particular for the Senate if you choose to vote ‘below the line for individual candidates (as opposed to ‘above the line’ for parties) as I did, it entails carefully rating each politician in order of preference. In my case that entailed numbering from 1 to 84 to cover all the candidates on my ballot. 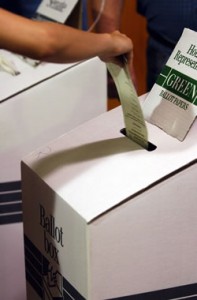 I’m a big softie at heart. And once again (it happened last Federal Election too), while filling out my vote I had a huge upwelling of emotion that thankfully got stuck as a lump in my throat .. lest the person next to me wonder why tears were dripping on my ballot paper …  Why the emotion? Because of the honour and the kinship in knowing that I’m part of something bigger – a community that respects me enough to count my thoughts amongst them and ultimately allow my voice to be heard and to make a difference.

“Be the change you want to see in the world”  ~ Gandhi