Perhaps you’ve seen them on city street corners or standing in the middle of public squares, these seemingly crazy people with cardboard placards advertising their wares: Free Hugs.

Free? The very word induces scepticism. Nothing is ever free right? Are these people starved of affection? What’s the catch? There’s always one, isn’t there? 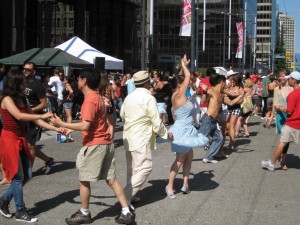 Yesterday, I was downtown Vancouver to watch a Salsa dancing celebration. People literally dancing in the street with the sultry moves of Salsa and offering those brave enough to take a hip-swaying public lesson the opportunity to learn.

The energy was electric, the rhythm contagious, and the street dancing … well, liberating. 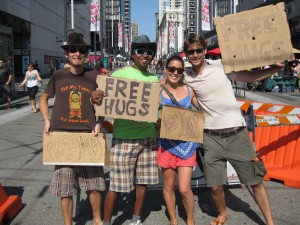 As I was leaving four of these crazy huggers enthusiastically called out to me – their eyes alight with smiles that stretched from ear to ear. Perhaps I had had too much Salsa but I took them up on their offer of a Free Hug.

Of course I was sceptical at first. Hugs are for family (my mum’s a huge hugger), for friends, but from a stranger? I didn’t expect much. Now I’m here to say that I’m converted. 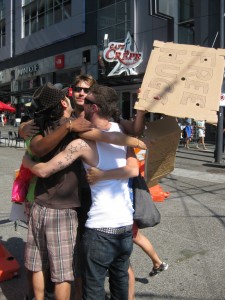 I got a group hug from three of them and an individual hug from the fourth. Surprisingly, I walked away happier, lighter of spirit and infectiously with my eyes now alight and a broad smile on my face that I couldn’t suppress if I had wanted to – all from what was a brief exchange of the most basic of human interactions.

They made a difference in my day and I turned back to tell them as much.

It was a sunny day, one of the warmest in Vancouver’s flawless summer this year and here this group passed up the opportunity to be at the beach or lounging poolside to share some love and simple affection with strangers. Why? What motivated them? 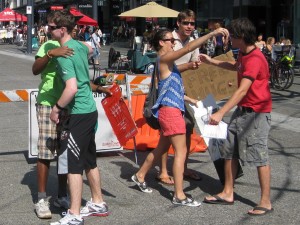 Joy; happiness; spreading love – were the quick answers. But when pressed, one of them elaborated that in his view, “If you live in a small town there is more connectedness with your neighbours than here in a big city. Here people have barriers up and tend to walk with blinders on. We’re just trying to even out the big city balance by breaking down those barriers a bit.”

They were even thoughtful enough to have brought spare “Free Hug” placards for those so inclined to join them in their love-spreading endeavour and as I was leaving it looked like one woman was joining the ranks to also distribute Free Hugs.

Now that’s how you start a movement!