My best flight ever. Hands down, absolutely ever!

I had been in Hong Kong with a good friend of mine, CherryPop (this is truly his nickname). We’d even extended our stay by one day we were having such a great time. Having gone through customs & security at the airport in preparation for our return flight to Sydney we were just about to walk up the stairs to the Virgin Atlantic (another airline I love!) Upper Class lounge when I spied one of my best friends, ReallySmartGuy, about to walk into a shop with his young son. I couldn’t believe my luck. Moreso because ReallySmartGuy lived in London at the time, so bumping into him in Hong Kong seemed extraordinary. What’s more he was also en route to Sydney on the same Virgin Atlantic flight as we were.

I’ll never fully understand coincidence like that: the fact that we would be in the airport on the same day, particularly when I was supposed to have flown the day before and only changed my flight at the last moment. Then there was that split second timing that allowed us to meet. One minute either way and we would have missed each other – me up the stairs and my friend into the shop with his son. Not too mention we were in two different classes that boarded the aircraft from two separate air-bridges. We could have just as easily been on the same plane and been none-the-wiser if we hadn’t bumped into each other. 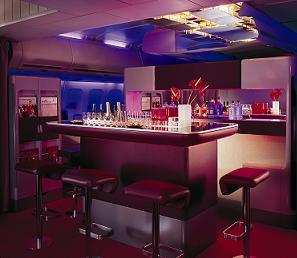 Never one to pass up an opportunity, as soon as I got on board I asked the cabin crew if I could bring my best mate up to Upper Class. Not a problem they said. I don’t think anyone could have denied my enthusiasm at that stage. The three us sat at the uber-cool Virgin Atlantic  bar while ReallySmartGuy’s son sat in my seat watching cartoons.

Here I was doing what I love most (so often the solo traveller) but this time flanked by two great mates, drinking cocktails, flying at 35,000 ft. I couldn’t have been happier. At times we were so caught up in our camaraderie and conversation that it MIGHT have appeared we were oblivious to the fact that we were flying long haul to Sydney. Far from it! In our quiet moments we exchanged knowing smiles, childish self-satisfied grins, we felt like rock stars on a private jet.

Have you got a story of bizarre coincidence, of meeting someone overseas / in another corner of the country in the most unlikely of places and / or circumstances?