A Tale of Two Buses

I am sitting by the side of the road, California Interstate 5 to be exact, at 11pm on a Friday night as I write this.

I was on longhaul bus trip from Las Vegas to San Francisco. ‘Was’ being the operative word. My Greyhound bus, which was running about 60 mins late as it was, has broken down due to loss of air pressure which has rendered the brakes useless. It’s roughly three hours before an alternate bus can reach us here in the middle of nowhere … and then another four hours until we get to San Francisco … so our scheduled midnight arrival will now by more like 5am. (Friends encouraged me to fly but I wanted to see the California countryside and save some money – not that I’m complaining!)

Most of the passengers are still inside the bus which rocks every time a semi-trailer whips pasts at 70miles per hour. The bus driver is patiently babysitting those that keep wandering off into the bush. Most particularly those with a penchant for smoking that neglect to fully extinguish their cigarettes in the dry scrub. (That’s all we need is everything to go up in flames around us.) 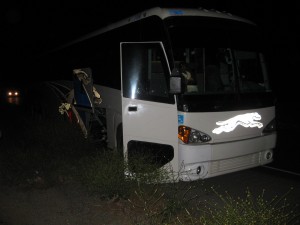 I’m trying to find the ‘experience’ in all this. Patience? Acceptance of what you cannot change? One of the passengers spread his picnic blanket over the prickly brush and offered me a seat. When I stop to look around there’s three things I can’t help but notice: 1) On the odd instant when the traffic thins, the pitch black darkness rapidly closes and the stars appear incredibly beautiful, full, and abundant. 2) The traffic on the highway is loud. Louder than I would have expected. Why animals even come close to highways is now mystery. 3) The bus passengers, aside from an initial bit of grumbling have quietly settled into their fate. I would have expected more outrage, frustration expressed – you certainly see enough of it at airports – but here everyone is has taken the break down in stride.

Kudos goes to the bus driver, who as our designated leader has calmed the troops and led by example.

By contrast, my earlier bus ride from Las Vegas into San Fernando was on a working bus but with an ornery driver named Richardson that had the whole bus up in arms. Greyhound service 6007 was  scheduled to depart at 9:30am but was 45 minutes late in leaving. At the first stop, a rest break, he told the passengers to be back aboard the bus in 20 minutes, and we were. Unfortunately, Richardson didn’t deem to get back on the bus until 35 minutes later. We were now running 60 mins late.

Even more frustrating was Richardson’s attitude. Whenever a passenger, myself included, asked him about the delay and our concerns about making our connections to other buses, he was just short of rude saying, “We’ll get there when we get there.” Eventually he had so many people asking him the same question, he made a point of repeating the same tired, unhelpful answer over the PA system. THAT’S when people finally lost their patience.