Best be quick if you want to see a polar bear in the wild. By some scientific predictions two thirds of the world’s polar bear population could be dead by 2050 and possibly extinct by the end of this century if global warming continues unabated.

In May 2008 the majestic polar bear – the world’s largest land predator – was registered under the Endangered Species Act (ESA) as ‘threatened’. Finally, said some. Not soon enough said others. While others still, questioned why? when polar bear numbers appear to be greater than they were 30 years ago.

The move is seen as a definitive sign of the times; particularly symbolic because the polar bear is the first species to make the endangered list as a direct result of global warming. Unwittingly, the Artic King has become the poster pin-up for climate change and now wears the emblematic crown of a planet in peril.

Those that welcome the designation see it as a victory for climate change. As a path on which to start making legal inroads to instigate tighter environmental controls under the umbrella of polar bear protection. (Being listed by the ESA legally calls for the species’ habitat to be protected and preserved with strategies put in place to ensure its population recovery.) But what one hand gave the other took away: with the Bush administration issuing ‘a special rule’ that the polar bear’s listing could not be used to limit greenhouse gas emissions, the very thing responsible for global warming, and the main reason for the loss of Arctic sea ice, the polar bear’s hunting habitat.

A political pawn, it remains to be seen whether the polar bear will be given the full protections that other species receive under the act.

Already Sarah Palin, the former Republican VP candidate and current Governor of Alaska has sued the government to prevent polar bears from being sheltered by the ESA claiming that the protections the act would offer would regressively impede Alaska’s right to drill for oil. But without the full protection and recognition of ESA, the polar bear’s habitat will continue to melt and the predictions of extinction a very real possibility. 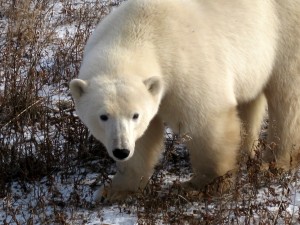 To understand why the polar bear is ‘threatened’ you must first understand how it hunts for its primary food source: the ringed and the bearded seals.

Each autumn, starting from the beginning of October through to mid-November the planet’s southern most group of polar bears gather on the western shores of the Hudson Bay, near Churchill, Manitoba, Canada.

Dubbed the polar bear capital of the world – it is the only human settlement where polar bears can be observed in the wild. It’s also one of the world’s best studied groups – that has seen a scientifically documented decline of 22% since 1987.

It’s here where freshwater rivers empty out into the saltwater bay that the sea ice starts to form first – aided by a number of long finger-like isthmuses stretching into the water that serve to collect and compact the newly formed sea ice.

Once frozen the ice not only provides a means by which to travel out to the ocean, extending the polar bear’s hunting grounds, but also serves as hunting platform and a place to consume its prey. Although great swimmers, known for their endurance in the frigid waters, the polar bear is still no match for the torpedo-like speed of seals. Instead, the polar bear patiently lies in wait (sometimes days at a time) by a breathing hole in the ice. When a seal emerges, with one deft (and lucky) strike of its hooked claws, the polar bear hauls the seal up onto to the ice to devour it.

But because of global warming the ice on Hudson Bay is forming later and later each year, as well as breaking up and thawing earlier each Spring – significantly shortening the time the polar bears have to hunt, feed and most importantly bulk up to make it through the long seal-less summer. Since the polar bear doesn’t hibernate in its off-season, but instead fasts, making meagre meals from berries and seaweed, the amount of food it consumes during the winter months is integral to its good health and even survival through the summer.

And while across the five polar bear nations (Canada, US/Alaska, Russia, Denmark/Greenland, and Norway) there are more polar bears than 30 years ago (a fact attributed to hunting restrictions in the 70s) the fate of the Hudson Bay polar bear is seen as predicative of what other polar bear populations can expect if global warming trends continue. Today’s Hudson Bay bears have six weeks less feeding time than they did 30 years ago. As a result the bears are smaller and weaker according to Polar Bears International, a conservation organisation intent on saving these Lords of the Arctic through its research and education. With each hunting week lost to global warming equating to as much as 10kg/week lost in all-important weight, the polar bears are becoming leaner and scrawnier by the time the following winter sets in.

For females, the fate is worse. For a female to fall pregnant she must have roughly 180kg of fat for the pregnancy to commence – without that, the egg is reabsorbed and she’ll have to wait another cycle. If she does become pregnant, she will be required to fast for up to seven months over the winter’s hunting months, only emerging from the maternity den in March. This shortened hunting season is crucial to her – more seals mean more milk, giving her cubs a better chance of survival through the impending summer months. But with the sea ice thawing and breaking up earlier each year, her opportunity to hunt is becoming extremely restricted, ultimately compromising the condition of her offspring. As a result females are having fewer and less healthy cubs and the Hudson Bay population is in decline. With a lifespan of only 15-18 years in the wild there’s not a lot of time to reverse this trend before generations are lost.