The joy of discovery. The thrill of stumbling across something new and feeling that this is your discovery. Yours, and yours alone. The people, if there are any, whether they be tourists or locals, they simply blend into the background while you make a personal connection with your newest find.

Today I discovered a new park in Vancouver. Of course as its ancient trees would attest it’s been there for eons but today was my first introduction and I was giddy with excitement as I raced my bike with child-like fervour and abandonment for the consequences of my speed along the winding paths. Eager to get deeper and deeper into the forest of towering trees, away from any sound of civilisation, be it car or construction, and yet at the same time amazed by the very fact that I was surrounded by a thriving city and this its hidden gem. 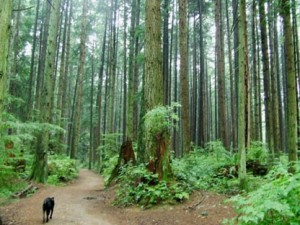 What made it so special? I come back to the trees, the towering trees. The type that only the West Coast (or the Wet Coast as it’s aptly called) of North America can produce. They weren’t as thick as California’s redwoods – through which I have driven a car – tacky but thrilling none-the-less. But they were tall. Straight. A forest of enormous pillars that immediately imparted humility to those standing dwarfed beneath. And unlike other West Coast forests I have been in, the undergrowth was low – a testament to the age and supremacy of the trees I’m led to believe. They have established their dominance and right to the canopy above, the ferns below them are content to simply lay low in submission and act as ground cover.

The impressive state of the trails is also worth mentioning. The perfect place for non-mountain bikers to catch the biking bug; to realise why mountain biking is so much fun, but without the bumpy, muddy ride. I sped through the forest for the sheer exhilaration of it but you could just as easily take a Sunday stroll.

I had the Park to myself for some time. Just as I had convinced myself that this truly was my discovery – a forgotten patch of green amongst our busy lives – I came across a dog jogger, then a couple strolling. That’s ok, it may have been my discovery today, but it became our secret. (A secret I’m willing to share.) Besides, they were going off on different paths. Paths restricted to bikes and this only makes me want to return and investigate these other pathways in the near future.

Where: Pacific Spirit Park
How to get there: Map

To do or not to do? There is no question!: Go for a walk in the woods. Reconnect with nature. Walk in far enough to leave the sounds of civilisation behind. Breath deeply. Soak up with the smell of nature. Look for the intricacies of life on the ground hoping to reach the top.

Other forests worth exploring:

Where’s your favourite place to retreat to nature – whether in your backyard or overseas – and why?