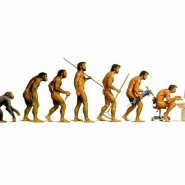 It’s funny, evolution, I mean, it’s not like we know as we sit around Googling things which of our current skills and attributes are going to advance the species.  Sure, we can identify what might get someone ahead in business or at school, but when you talk about the evolution of the species, all bets are off.  I mean it’s not like the fish who didn’t grow lungs back in the day were any less doubtful that they were on the short end of the Darwin stick

I’d like to have the evolutionary wherewithal to drag myself out of the pond but it makes me wonder what skills a million years from now they’ll be saying, “Well, if it wasn’t for 21st Century Man, we’d all be hooped about now”.

Texting?  It is a skill allowing one to adapt to one’s environment these days I suppose, but I don’t think it has the stickiness of something like, I dunno, legs for example.

I think it’s probably more likely something such as the ability to ignore people.  I would argue that if there is one skill everyone needs today to survive and advance the species it’s the ability to selectively listen to all the crap that is being thrown at you minute by minute and to pull out and remember that which is important for your survival.  Those that can’t do this, will find themselves under the wheels of the proverbial bus or back in the pond with the others.

Some might argue that it’s going to be something like multitasking that will save us, but again, I think that is like the ability to churn your own butter or tame a horse to pull your buggy — seemingly important once but largely irrelevant now.

No, I’m convinced that those who aren’t overwhelmed by the noise that comes from just being alive today will go on to procreate and in turn teach their young to filter through crap as well.

More of Darren’s observations can be found on his blog: darrenjroberts.com